For the past few months I've had a lot of discomfort in my breast.  It started as a pain and now it's just daily discomfort.  The level of discomfort varies but is ALWAYS there.

I went to the OB when it first happened.  I don't want to mess around with things like this.  I was told it was just my hormones and nothing to worry about.  However, if it persisted I was to go back.  Well, I did just that because it did indeed persist.  So, I went back a month or a month and a half later like suggested.  This time I was told that it's not my breast, the doctor feels it is muscular.

Okay, well I know it's not muscular.  I feel it IN my breast.  So, the discomfort continued and now I feel it in my back behind the breast.  I called the office today and they tell me that they are sorry, but all doctors in the office are going to be taking their vacations.  So, the only time they can see me is in three weeks.  REALLY??  They know this isn't something new and I've been there 2 times before.

Well, I made the appointment, but then I called back.  I said really, I need to wait that long?  I told them I've already been there 2 times for this problem and they either need to get me in ASAP or get me a script ready for either a mammo or an ultrasound.  I don't care if I'm younger than the allowed age by insurance.  THIS is serious and I need to have an answer. So, I'm waiting for a call back.

Today, the discomfort is worse than it has been.  I'm getting really scared and on the verge of tears.

If anyone can spare some T&P's, Vibes for me, I would be so appreciative.

Thank you!!
Posted by Candid Chic at 1:31 PM No comments:

Trying To Get Rid Of My Shell!

As a child, I grew up extremely shy like a turtle in it's shell.  I have many theories on why this happened, but then I would be writing a novel.  So, maybe I'll post about them another time.  When I was very young, I would cling to my mother and not leave her side if we were out / around other people.

In school, I was quiet and shy, but still had friends.  Growing up my family was poor.  I never really asked anyone to come over because our place was very small and my mom didn't really encourage the idea.  I was never told I shouldn't let our "status" stop us or that I shouldn't feel embarrassed, etc.  I'm sure this added to how extremely shy I was.

A few of my close friends moved away after elementary school, one out of state and the others a few hours away.  By the end of middle school, I started to poke my head out of "my shell" more and made more friends, best friends. 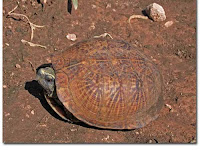 We then began high school.  I kept my head out of the shell, but still was hesitant.  Then, our high school relationships began and I really started to become more out going and made so many more friends.  It felt great and I finally was being "me" and feeling confident.

Unfortunately, after high school I was in a bad relationship, no need for details right now.  However, I lost touch with a lot / a majority of my friends and started going back in to my shell.  It really did a number on my self confidence.  After 3 years I finally grew the courage to end the relationship and move on with my life.

I had what I thought was my Best friend, but then later found out she was still in touch with the bad ex.  We were also going in 2 different directions in life.  I had to say goodbye to that "friendship".  I put quotations because in the end I learned she truly wasn't a friend to me.

I started a new job and it was great.  I made so many new friends and we all would hang out, go shopping, and have dinner.  Well, 2 moved out of state and some of the others either just faded all together or life just made it harder to stay in touch as much.

I then met my husband and fell head over heels.  He truly is an amazing man, but that's another post.  We've had and still have an amazing relationship / friendship.  My husband is my Best friend.  When we first started living together, I moved an hour away from where I grew up.

It's hard as an adult to make new friends, it really is.  So, I don't really know many people where I am.  The majority of people I know are an hour or more away.  That's pretty far when you have a child just over 1.  Once I became a mom a little over a year ago, I thought it would become easier, but that is not true.  I heard that parks are a great place to meet other moms, but every time we went to the parks, there really wasn't anyone there.  Unfortunately, right now we can't afford to go to a place such as Gymboree or Little Gym, although I'd love to.  It would be great for my son and myself.

So, how does one meet other moms / new friends as an adult?  I'm 30 and I find it difficult.  I mean you also don't want anyone to think you are coming off too strong either.

Well, I do have a Girls Night coming up with another mom I met from having my son's photos done throughout his first year.  So, we'll see how that goes.  I want to rid myself of my shell for good, but it truly isn't an easy task.  I actually get nervous about being in social situations which I know is silly, but I think I have "social anxiety".  I am looking forward to going though and I do know it will be fun.

If you have any Friendly advice / tips for me on coming out of my shell completely or making new friends as an adult, please feel free to share. 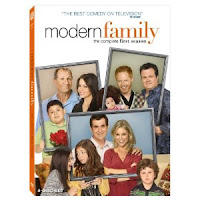 Both qualify for Free Super Saver Shipping for orders over $25.  It's a great deal in time for the holidays.

Don't forget, this is today only!

Happy Saving & Shopping!
Posted by Candid Chic at 10:24 AM No comments: 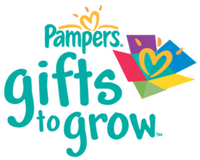 There are 2 codes, each worth 10 points.  Go over to Pampers Village and sign in or register if you aren't already signed up.

20 Points will then be credited.  You don't have to have a baby or child in diapers to do this either.

Happy Redeeming!
Posted by Candid Chic at 10:13 AM No comments: 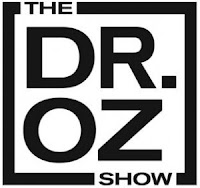 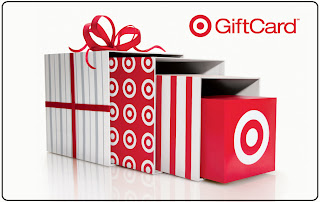 I'm sure everyone would love to receive one of these, especially with the holidays right around the corner.

Do you have someone in your life, even just an acquaintance that does nothing but constantly complain?  Oh, there are a few that I know.  Not only do they complain, but they do NOTHING to change what they are complaining about.  It has really driven me crazy at times.

There are two specific people that are habitual complainers.  No matter how you try and help them, it's like talking to a brick wall.  So, they won't help themselves or listen to / accept help from others.  Every day on FB, there are quite a few posts from each and they are 99.5% of the time complaints and negativity.  The statement, Misery Loves Company rings so true when it comes to these individuals.

One is a family member and I used to always feel so bad and I occasionally still do.  However, I've reached out and so have all other family members on millions of occasions.  I used to feel guilty about mentioning things I did / place I went with my husband  and now my husband & baby.   Anything happy or positive I would be hesitant to share because my mood would usually be turned in to feeling down.  I personally don't like negativity or want to be around it.  I certainly don't want my child to be around that.

I just wish these people would stop complaining if they aren't going to at least try to help themselves, try to make their lives happier.  Nobody else can do it for them.  They have to be willing to make a change. It just starts to take a toll on others.

Hoping everyone has a Happy, Complaint Free weekend!  :-)
Posted by Candid Chic at 6:13 PM No comments:

It's that time of year!  The time for the holiday season to begin, to be with family & friends, and to start preparing / shopping.

One of the things I look forward to most is picking out and ordering our family holiday cards.   This is a very important part of the holidays.  Ever since my husband and I got married, we started doing a photo holiday card.  Now that we have a child, having a photo is a Must.  We love being able to share a great photo or a few with our family and friends at such a special time.

It's also important that the cards are great quality, that we can personalize them, and they aren't overpriced.  We also like having different card designs / templates to choose from.  The place that we go to and love is Shutterfly.  They provide everything I mentioned above and more.

I love that this Love 2010 Christmas Card allows us to put 2 photos (one of the family and one of our son), as well as bring friends / family up to date on big events that happened in 2010.

Photo Holiday Cards are our favorite and there are over 700 to choose from at Shutterfly.

Another thing that is very important to us and that we are going to pass on to our son, is to send Christmas Thank You cards for every gift / nice gesture we receive.

I love the Merry Berry Stripes Photo Thank You card.

For a non-photo Thank You card, I love the Merry Little Penguins. It is perfect.  There are 3 penguins, 1 for each of us, has the year, and we can personalize with our family name. 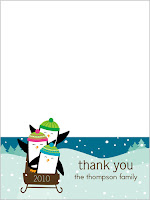 Shutterfly offers so many different options, from holiday photo cards, to holiday thank you cards, holiday invitations, and even New Year's cards.  Check out all they have to offer here.

We use Shutterfly for all of our photo needs, so there is no doubt that we are using them for our holiday photo cards and thank you cards this year.

Are you a Blogger and interested and receiving 50 FREE holiday cards from Shutterfly?  Then, go over here to Shutterfly for more information.

This post is part of a blog series hosted by Shutterfly.  After submitting the form, I received an email stating that I was selected.  All opinions in this post are my own.

Have a Happy start to the holiday season!!